We know the Best SNL Cast Tourney has been the buzz all weekend, but just in case you've been living under a rock and didn't see the news - CONGRATULATIONS again to Eddie Murphy - The BEST SNL Cast Member of All-Time!!

The tournament might be over, but the impact is still being felt.  So let's look at some of the big takeaways.

The Undisputed Champion: Eddie Murphy was a clear fan favorite in the bracket round - and he showed why as he carried that momentum right into the tournament. He dominated the FIRST three rounds like nobody else, getting an average of 83% of the vote!  And in the final four he stared down top three contender Will Ferrell in the semis with a commanding 55-45 win, before ending Bill Murray's feel-good run to the finals.  Now when your friends ask you who's THE best cast member of All-Time, it's scientifically proven - it's Eddie Murphy.

The Matchup: There's no doubt that when the final bracket was released, the possibility of a Round 3 matchup between Chris Farley and John Belushi was on EVERYONE'S radar.  Well, it happened.  And they didn't disappoint. These two were top 5 fan favorites before the tourney started, and their margin of victory going into their head to head were essentially identical - steam rolling their opponents with an average of 82% of the vote! In the end, Belushi narrowly nudged his rival Farley out in a back and forth nailbiter 54-46..

Cinderella Story (sort of..): Bill Murray's amazing run to the finals was one of the most inspiring in Bracket Breaker history.  Murray is always a fan favorite, but was still on the outside looking in for most people's final four predictions.  And you can't blame them.  He had one of the toughest paths to get there, having to take down two fellow cast mates - Dan Aykroyd and John Belushi - along the way, not to mention the incredibly popular Phil Hartman.  Most critics had Belushi or even Phil Hartman making the final four.  But that just didn't matter to Bill Murray who rallied for win after win and in the end, gave heavily favored Eddie Murphy a r that went down to the final minutes of voting.  Congrats on an epic run.

Dream Cast:  We dove deep into the bracket submissions and the tournament results to compile the SNL Best CAST ever - based on how YOU all voted.   So here it is: 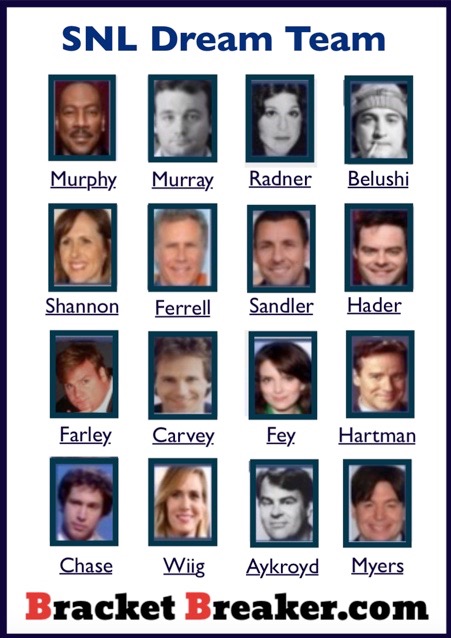